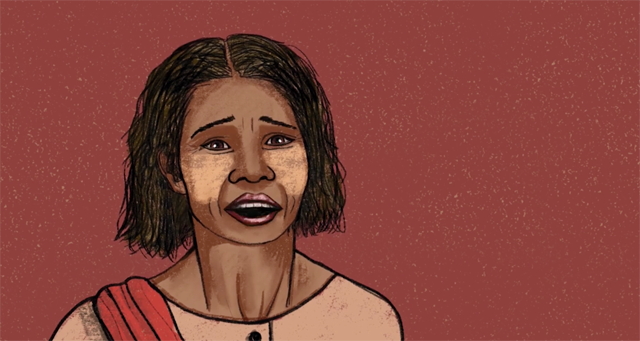 Welcome to Online Program Two which features 7 short, hard hitting films ranging in topics from genocide, displacement, belonging and freedom from persecution through art through to politically motivated deaths of Australian Returned servicemen and women. Program Two features music film clips, comedic micro shorts, true stories and is inclusive of film makers from a range of cultural backgrounds. Each film is introduced by a short interview with the film maker.

Echos From Myanmar
Paul T McGilvray, 4’00, Australia, 2021
Voice recordings smuggles out of Myanmar before the nationwide black out reveal the emotional state of everyday civilians in this daring short film exposing an ongoing military coup.

Freedom Is Mine
Mahmoud Salameh, 3’30, France, 2020
The power of art of give freedom to those who are persecuted and detained is shown to be a powerful force in this short, poignant animated film based on real life experiences.

Wont Be Quiet
Roz Pappalardo, 3’31, Australia, 2021
The politically motivated deaths resultant from agent orange touches the lives of people to this day. Their deaths occurred to protect corrupt politicians and they deserved far better. One of two featured Music Clips and based on a true story – this piece is a protest against corruption and silencing of victims and their families.

The Smiling Boy
Farhad Bandesh/Neil Sanders, 3’58, Australia, 2021
Based on a photograph of a young Kurdish boy waiting in line surrounded by many other children and adults. He is calm. He smiles at the camera. In less than an hour he will be dead – buried in an unmarked grave and one of countless victims of the Kurdish genocide. He shows no fear.

A Plastic Flower
Shirin Shakhesi, 4’00, Australia
We are extremely proud to present Shirin Shakhesi’s film. The title gives nothing away and the story. Based on real life events, A Plastic Flower is executed with technical and artistic perfection. With hints at much more laying just below the surface, this is a powerful short film about disposition, belonging and loss. Shirin is a film maker that you must keep an eye on.

The Trouble
Pina Tuteri, 4’12, Australia, 2020
Pina Tuteri’s short music video incorporates live action and animation to deliver a powerful account of struggling with feelings of isolation, loneliness and mental health, tinged with a delicate hope that change will come. Pina is a disabled film maker and singer/ song writer who is currently recovering in intensive care after suffering a massive cardiac arrest, stroke and insertion of a tracheostomy. It is with great pleasure that we release this soulful and talented woman’s work into the world. Our second of two featured music clips and based on her own life experiences.

Untitled Animation 1,2 & 3.5
Dom Sowersby, 1’45, Australia
A short, animated film comprised of multiple microfilms, Untitled Animation 1,2&3.5
is a “blink and you’ll miss it’ experience! Dom Sowersby delivers scathing roasts to the most famous of politicians in a fast, punchy format. A self-taught and emerging animator, Dom has given us our stand out comedy inclusion in the line-up – we simply had to end the program with Dom’s direct sense of humour and delivery.