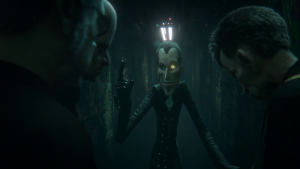 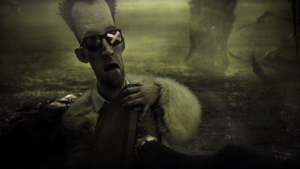 In 2019 the animation world lost one of its most inspired, uncompromising and innovative exponents. Dutch artist, musician and animator Rosto drew collaborators of the likes of Tom Waits and Terry Gilliam into his web as he used a potent mixture of raw imagination and hi-tech animation technologies to bring the world of his dreams to the big screen.

“Everything’s Different, Nothing Has Changed” is the documentary entree into the immersive savannah that Rosto traversed. It offers glimpses of his work as the creator of one of the first on-line graphic novels “Mind My Gap” and the vital energy his projects took from – and gave to – his experimental rock band “Thee Wreckers”.

It is his “Tetralogy” however that really unleashes Rosto’s power as a punk cartographer of the immersive world he simply called ‘Dream City’.

“No Place Like Home” traces the first steps into this world, “Lonely Bones” goes much deeper giving us a more detailed introduction to its key denizens and “Splintertime” reaches beyond the physical urban terrain to foist upon us characters that have haunted and inhabited Rosto’s work throughout his life.

It all comes to a conclusion with “Reruns” which begins to explore the end of the filmmaker and the world and ideas which lived most vividly within his own mortal imagination.

Rosto was an artist who promised almost everything…. except compromise.

Everything’s Different, Nothing Has Changed
Rosto
France, 20’00, 2017
A behind-the-scenes documentary charting the creative rise and development of Rosto AD and Thee Wreckers through their art, music and films.

No Place Like Home
Rosto
Netherlands/France, 6’00, 2008
A pulsing, moody film delving into the uncertain terrain of ‘Dream City’.

Lonely Bones
Rosto
Netherlands/France, 10’00, 2012
As the past is consigned to memory, the exploration of the dark topography ahead becomes all consuming.

Splintertime
Rosto
Netherlands/France, 11’00, 2015
An intense, bordering-on-surreal depiction of a band of dreamy spirits in an ambulance as it runs out of road.

Reruns
Rosto
Netherlands/France, 14’15, 2018
The oldest of memories blend with the newest of constructed visions hinting at an end just over the horizon.