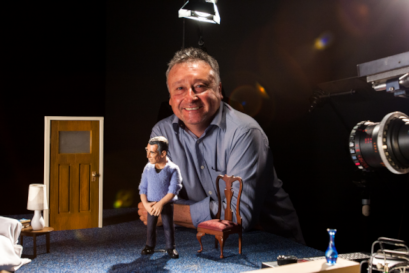 The Making Of “Meanwhile…” & The Return Of Michael Cusack_2020

Master Australian animator Michael Cusack has produced an outstanding collection of superbly crafted independent films and some of this country’s most loved animated ads. His 2017 masterpiece After All was the first film in MIAF’s history to win both Best Australian Film and Best Of The Festival. And his ads for Schmackos have beamed into every home in Australia for years.

For more than 30 years, Michael and his business partner, Richard Chataway, ensured their Adelaide studio Anifex produced a constant stream of technically stunning, creatively charming puppet animation perfectly suited for the cause – be it winning hearts or driving sales.

The plan had always been to open MIAF 2020 with his latest film Meanwhile, At The Abandoned Factory… Plans had a funny habit of unravelling in 2020 but this one we hung on to.

MIAF 2020 Re-Animated is thrilled to bring Michael back into the cinema and have him take us through the making of Meanwhile… It’s quite a story. Magnificent sets, screwball characters and generous servings of humour and suspense.

And he won’t be alone. Michael will bring a collection of the puppets, props and pieces of set that were all part of the jigsaw puzzle that brought Meanwhile… to the screen. Michael’s last appearance and Q&A at MIAF back in 2018 filled the cinema and ran overtime because nobody there wanted the magic to end.