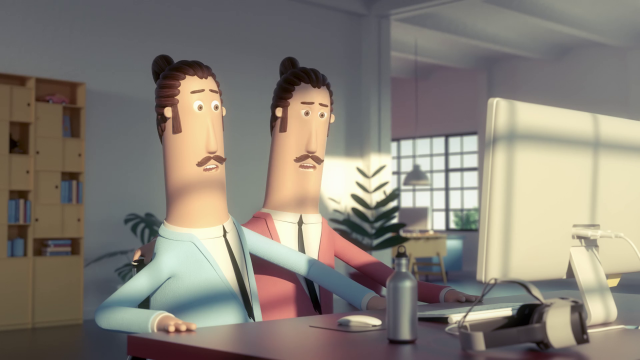 Warning: Some films in this program contain mid-high levels of violence and sexually explicit material.

Sous Le Cartilage Des Côtes
Bruno Tondeur
France, 13’00, 2018
Pierrot has a wound that won’t heal. Pierrot is about to die… or thinks he is.

Adorable
Cheng-Hsu Chung
UK, 5’21, 2018
Adorable comes in all shapes, sizes and forms, it’s energy a wonder to take in.

Papeton d’Aubergine
Elisa Labbe
France, 3’13, 2018
Tension is rising around the table and a sense of impending detonation electrifies the air.

Happy Ending
Eunju A-Ra Choi
UK, 4’44, 2018
A visual essay on the commodification of sexual experience based on the on-line testimony of a Korean prostitute.

The Backward Astronomer
Jake Nelson
USA, 10’07, 2018
A life of New York opulence is punctuated with the discovery of a doorway leading directly to the surface of the moon.

A Double Life
Studio Job, Joris & Marieke
Netherlands, 2’43, 2018
A deliciously dark comedy about a husband and wife whose different ideas of gender conformity lead to an unexpected confrontation.

The Subject
Patrick Bouchard
Canada, 10’15, 2018
A story-within-a-story about the art of creation, doubling as a detailed homage to the animator’s vocation of breathing life into the inanimate.

The Art Of Reducing Noise
Heidi Stokes
UK, 4’17, 2018
In our turbulent times, silence seems like a necessary escape.

My Little Boys-The Lucky Cockroach
Jack Shih
Taiwan, 3’28, 2018
The arrival of a huge cockroach triggers an often hilarious shake-up of the father/son relationship in the house.

Bavure
Donato Sansone
Italy, 4’40, 2018
The evolution of a human being from his creation to his awareness of the mysteries of the universe portrayed in thick oil paint.

Egg
Martina Scarpelli
France, 12’08, 2018
Have you considered food as a choice rather than a requirement? One of the most awarded films on the circuit this year.