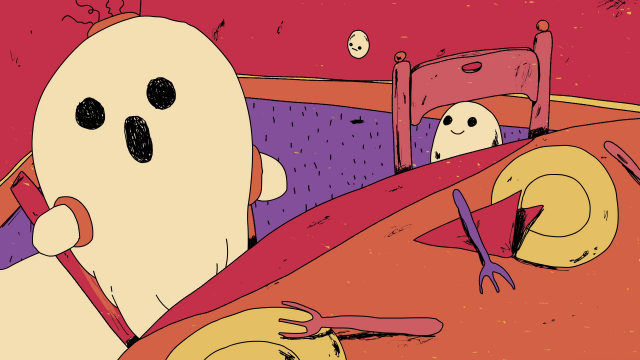 Pattern Recognition
Dirk de Bruyn
Australia, 5’00, 2019
An intriguing exploration of the changing impact of speed on our ability to view an image and construct meaning and narrative.

The Collector
Tara Ainsworth
Australia, 2’28, 2018
An enchanting endriftment through a floating galaxy of the imagination.

184 Cups Of Tea
Lauren Hunter
Australia, 4’05, 2018
A cup of tea might not solve every problem but it can act as a kind of punctuation for life’s travails.

Fight Club But With Tennis And No Fight
Sylvie Le Couteur
Australia, 3’34, 2018
Drama descends upon two tennis-obsessed women as the tension moves from off the court and into the café.

Still Alive
Dennis Tupicoff
Australia, 5’52, 2018
Death sings to the God that moves him – but now he encounters something in the darkness.

Scentation Synesthesia
Nhat Nguyet Hoang
Australia, 1’40, 2018
An experimental that attempts to explore the synesthetic relationship between the sense of smell and the ability to see colour.

Match Point
Jennifer Tran
Australia, 1’20, 2018
Table tennis as ONLY animation can conjure it.

Sohrab And Rustum
Lee Whitmore
Australia, 13’31, 2018
An inspiring English teacher transports her class into the very heart of a Persian poem.

Mysterical Planet
Matt-Bissett-Johnson
Australia, 1’57, 2018
A hapless astronaut looks on as a dismembered tongue grows legs and begins to survey all around it.

Robots In Paradise
Caroline Jiang
Australia, 5’14, 2018
Two happy, gentle robots take some time out to visit a theme park and take in the sights.

Curb Rats
Charlotte ‘Doe’ Bird-Weber
Australia, 3’30, 2018
Everything is like a brinkmanship towards impending doom or a funny story – a frank look at the Brisbane underground.

Hearsmart Tinnitus
Samuel Lewis
Australia, 2’36, 2017
Alex the musician takes us through her experience with tinnitus – it’s hard to turn off but it can be turned down.

The Colour Thief
Chris Ebeling, Matt Estela, Daniel Flood
Australia, 2’03, 2018
A desperate battle to grab the most precious commodity from the clutches of those who would deprive others of it.

Pinchpot
Greg Holfield
Australia, 4’20, 2018
The passage of time – a story about things made out of lumps of clay.

Lost And Found
Andrew Goldsmith, Bradley Slabe and Lucy Hayes
Australia, 8’00, 2018
A clumsy crochet dinosaur must unravel itself to save the love of its life.