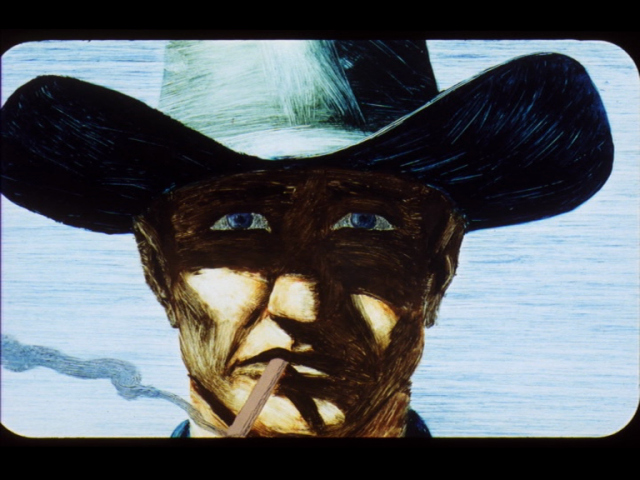 The Pannonia Studio has a fascinating history. Formed in 1951 in communist era Hungary, it produced hundreds of animated shorts and more than 20 animated features – including the classic “Son Of White Mare” by Marcell Jankovics. The animated shorts being made at Pannonia were absolutely unlike anything else being made in communist Eastern Europe. Some of them seemed to offer a surprisingly sharp social commentary and many of them burst with a colourful and psychedelic or surrealist energy.

Pannonia Studio Showcase #2
Pannonia: A Certain Drama showcases a diverse suite of films that utilise the unique properties of animation to amplify a sense of drama in all of its many facets and inspirations from the comical – though lethal – excesses of life in a military state to the operatic thunder of century’s old classical music.

Western
Gabor Homolya
Hungary, 2’00, 1989 (NL)
Out in the wild, wild west there is only one perspective that matters.

Dreams On Wings
Marcell Jankovich
Hungary, 8’18, 1968 (NL)
An ever morphing visual travelogue that puts India at the centre of the world.

Concertissimo
Jozsek Gemes
Hungary, 3’11, 1968 (NL)
An animated allegory set in a concert hall about armed aggression and the ignorance of the crowd.

Horse In The House
Gyorgy Csonka
Hungary, 5’36, 1975 (Subs)
An investigation into the sighting of a blue horse with roller skates in an apartment building turns into a burlesque nightmare.

Aki Bujt, Bujt
Peter Szoboszlay
Hungary, 5’07, 1968 (NL)
A game of hide’n’seek in an environment where there is nowhere to hide but your own imagination.

Behind The Bars
Gyula Macskassy, Gyorgy Varnai
Hungary, 1’33, 1970 (NL)
One prisoner thinks he has found the perfect escape that will at least let his mind run free.

Changing Times
Istvan Kovacs
Hungary, 3’00, 1977 (NL)
Every change of regime – and they are coming thick and fast – brings about a change of who must stand before the firing squad.

Miracles Of The Night
Maria Horvath
Hungary, 8’04, 1982 (Sung)
An animated illustration powered by the work of the 20th century Hungarian poet Weores Sandor.

The Wind
Csaba Varga
Hungary, 6’00, 1985 (NL)
An exquisitely bleak and hypnotic visual essay on the meaning (or otherwise) of life.

Ab Avo / Homoknyomok
Ferenc Cako
Hungary, 7’00, 1987 (NL)
Traces of sand: an absolute masterclass in sand animation from one of the true living masters of the form.

Funeral
Jozsef Gemes
Hungary, 2’11, 1970 (Subs)
Oder has to be restored after a sombre funeral takes a swerve into the left field.

The Fly
Ferenc Rofusz
Hungary, 3’00, 1980 (NL)
A fine day in the life of a fly presented completely from the fly’s point of view. A fine day until something dreary happens, that is.